Global investment, including development, rose 4% in the year to June

The global property investment market saw volumes rise 4% year-on-year to USD 1,5tn in the year to June, according to new research out today from Cushman & Wakefield.

During the 12 months to June 2017, the top 25 cities globally accounted for almost half of the market but some sharp falls were seen in traditionally dominant cities. New York remained the most sought-after market for the sixth year running despite investment dropping 37%, while a 25% decrease saw London lose its top three status and Paris witnessed a 21% decline. A lack of available assets was a key factor in these declines.

Relative winners included San Francisco which entered the top three thanks to 4.5% growth and Hong Kong with 19%. At the same time, Tier 2 cities, such as Malmö, Nice and Osaka gained importance through increased international interest as investors cast their net more widely in search of better returns.

North America held its strong grip as the leading region for total investment, with 13 US cities ranked in the top 25 and six each from Europe and Asia Pacific. Cities in the latter region experienced some of the most dramatic growth. Seoul saw volumes increase by 98%, and Singapore 52%.

David Hutchings, Head of EMEA Investment Strategy, Cushman & Wakefield, and author of the report, said: “The strong global growth is perhaps something of a surprise given the headwinds faced by the market in 2016 but investor sentiment has definitely improved. With fears of a rise in populism taking a back seat, at least for the moment, globalisation in the real estate sector continues apace.

“The falls in activity seen in some leading cities reflect a lack of available opportunities more than fall in demand, but it is also true that rising prices are encouraging some investors to broader their horizons.

“While the ability of New York, Tokyo and London to adapt and reinvent themselves will continue to reinforce their global hegemony, competition is heating up with investors’ attention landing upon a broader range of Tier 2 cities. Eighteen markets which were not targeted by cross border investors in 2015/2016 are now making gains, an indication of investor willingness to move into new markets.” 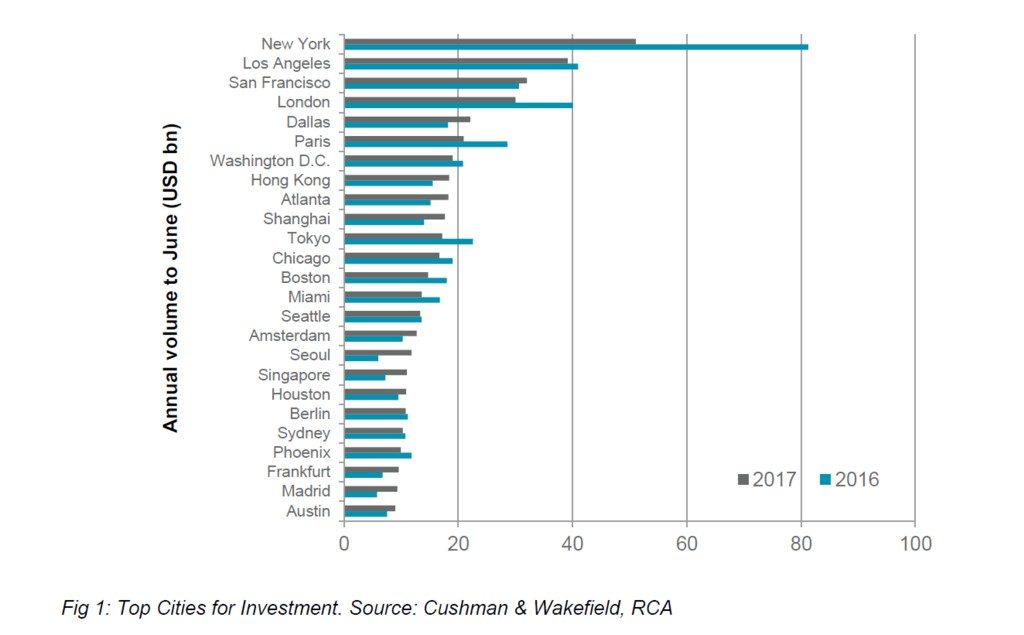 North America region
Growth was recorded in the majority of North American cities with San Antonio, Charlotte and Las Vegas in particular experiencing strong interest over the year. Despite the largest falls in the region coming from the cities ranked in the top 50 globally – New York, San Diego and Denver saw falls of -37%, -30% and -23% respectively – some of the big players in the US did see growth, including Dallas, Houston and Austin.

EMEA region
Central and Eastern European capitals fared best in terms of overall growth with volume growth in Prague, Budapest and Sofia in particular outpacing Western European cities. Similarly, confidence grew in Athens, albeit from a low base, with volumes reaching a 10-year peak.

Ten of the top 25 global cities attracting international investment were in Europe with London, Paris, Amsterdam and Berlin all in the top 5. A number of German cities rose up the rankings with Berlin moving up two places and Frankfurt climbing nine places over the year to rank within the top 10 recipients of cross border capital. Interest in Frankfurt was particularly notable among investors from Asia and the Middle East with volumes up 461% and 132% respectively.

For the first time in four years, European capital was the greatest source of total cross border investment, surpassing even North America.

Soren Rodian Olsen, Partner at Cushman & Wakefield in Poland, commented: “The CEE growth story continues and is now outpacing the more established markets in EMEA. While we continue to see substantial interest from South African and Asian Capital in CEE, in particular into Poland, the region has enjoyed strong inflows from Europe-based investors. The capital cities of Warsaw, Prague and Budapest are expected to record strong office investment volumes, which combined with significant retail and logistics portfolio deals will see 2017 being a new record year.”

Asia-Pacific region
More than half of cities in the APAC region reported negative growth with capital cities across the region including Sydney, Kuala Lumpur, Beijing and Taipei undergoing steep declines. Despite this, Asian cities increased their global market share over the year and increased their presence within the top 50. The strongest growth in region came from those cities experiencing rapid economic development, with Myanmar especially documenting impressive expansion.

Investment strategy pointers
Looking ahead, changing macro conditions point to a need for investors to change strategy. At the same time, uncertainties still exist. Key outtakes from the report concerning investment strategy include:
• Extended economic cycle with capital investment rising but inflation subdued
• Interest rates to stay low but not as low and not for as long as many expect
• Uncertainty is here to stay: greater diversification by region, country, city and sector is called for in response.
• Risk taking in the best cities is justified to create and reposition stock for modern occupiers.
• Leading Tier 2 cities in core countries and emerging submarkets in gateway cities should be sought.
• Emerging markets are coming back on the radar selectively, focusing on low risk opportunities in reforming economies
• Investors should chase growth backed by what occupiers want not yield levels backed only by a contract

Carlo Barel di Sant’Albano, Head of Global Capital Markets, Cushman & Wakefield, added: “The macro environment is widely seen as more favourable for real estate than just six months ago, with not just stronger sentiment but also an actual improvement in activity. Investors have become increasingly active as GDP growth forecasts have been revised upwards by the IMF for the first time since 2011.

“There has been a reduction in perceived risks and related volatility over recent months. US policy has been less destabilising than some expected and European election results have delivered fewer upsets than in 2016, providing a period of stability also in the eurozone. That said there are still several geopolitical areas of concern in the global environment and potential surprises to come.”

Portland International Airport to be expanded

Cushman & Wakefield was appointed manager of 18 commercial properties owned by…